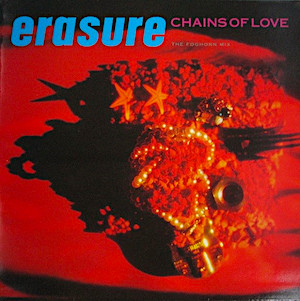 I hate 1988. Most of the Top 40 throughout this year absolutely sucks and I don’t feel a connection to any of it. There’s a good reason for that. It wasn’t created for me. The music was either sub-teenybopper dreck aimed at prepubescent kids, mostly female or 60s & 70s artists making music for their boomer fans (my parents). This is why you can hear most of this September 17th, 1988 countdown today at your local drug store. Because the original fans of these songs are always in line at a CVS buying the opioid du jour in between doses of Cialis. ENJOY!

If you had some extra babysitting money after buying Tiffany’s debut LP you might have splurged on this. By the way Kylie Minogue is the best selling female artist in Australian history, but she hasn’t done much in the States to earn her the “princess of pop” title. Her cover of this Little Eva #1 hit (OK, Grand Funk, too) will be her biggest in the US reaching #3. After one more minor hit, she won’t even chart on the Hot 100 for another 12 years. She’ll have two more Top 40 hits and then nothing else.

Steve builds upon his huge baby boomer-fueled comeback with the first of two singles from his Roll With It album. The title track spent a full month at the top. Not bad for a 40-year old dude who plays everything on the record except for the horns. This song also made the R&B Top 40, probably due to its soulful laidback vibe. Or the fact that it ripped off Jr. Walker’s (I’m A) Road Runner. The team of Holland-Dozier-Holland eventually got a songwriting credit for it.

38. Whitney Houston – Love Will Save The Day

Radio continually worked the fruitful 1987 Let It Loose album and squeezed it til there was no more juice left. This was the fifth single which has already peaked at #3.

This may be one of the worst songs to hit #1 ever. It’s a third rate rip off of Elvis Costello’s Pump It Up. It’s filled with annoying sound effects, like gun shots that sound like they’re from a Speedy Gonzales cartoon. And it has one of the shittiest ragga rap toasts from some white pseudo trust-funder who probably learned about reggae in his hacky sack club. Also The Escape Club was from England but never had any hits in the UK.

RAR – A late 80s ballad by a band’s singer who understands the importance of vocal dynamics. They would take this up to #2 kept off the mountain by the Winwood express. This may be the most tender farewell to hotel groupie sex since Supertramp’s Goodbye Stranger.

The late 80s Australian music invasion was so potent, it even had Americans recording covers of their songs, such as this one written and recorded by the country rock group, Rattling Sabres. Pat would take this up to #19 for her final Top 40 hit.

Four singles from Kick. Four Top 10s. It’s rare that INXS would record a ballad like this and it ends up as one of the best songs they’ve ever recorded IMO.

THW – Andy Bell’s plea to accept love in all its forms ascends to climactic heights behind Vince Clarke’s muti-synth arrangement. I was a big fan of Erasure and was rooting for their success when their third album, The Innocents was released. It’s a solid synthpop collection of catchy singles, but when their first release Ship of Fools went nowhere, I thought this was doomed to a cult audience. To my surprise Chains of Love got radio airplay and will eventually make the Top 20.

RAR – Phil the Shill took a working vacation to come up with the idea that he should star in a movie. Hence the film, Buster, based on the events of the Great Train Robbery of 1963. Because the film takes place during the 60s, Phil thought it would be cool to record a maudlin cover of the Mindbenders hit, which was popular in 1966. Plus, he knew he’d put himself through a few more weddings, and knew he needed something new to dance to. It will hit #1, blah blah blah.

While Rod was writing songs for his next album, Out Of Order, he and two band mates wrote a song called Forever Young. Somehow not realizing there was a Bob Dylan song with the same title that sounded very similar, Rod was told to send it to Bob to see what he thought. The end result was that Dylan is now credited with writing two songs called Forever Young that sound very much like each other and Rod got to keep his royalty checks.

THW – Not the comic strip character but then again I’m not sure – Brenda follows up her #13 hit I Still Believe with some raucous free style on its way up to #24.

Fun Fact: Brenda helped her background singer get a recording contract with Columbia. Her name was Mariah Carey.

Fun Fact #2: Brenda’s dad was Harvey Kaplan, who played organ in the band Spiral Starecase. They had a Top 20 hit in 1969 called More Today Than Yesterday that kicks ass over all these songs.

RAR – Glenn’s seventh and final Top 40 hit as a solo artist is climbing the charts en route to its #13 high. It will also hit #2 on the AC charts which explains why you might hear this in the background at your next dental cleaning.

27. Steve Winwood – Don’t You Know What The Night Can Do?

RAR – More than ten years after Lou Rawls sang weekends are made for Michelob, Steve was accused of selling out by letting that urine beer company use this song in their ads. Hey these tour expenses aren’t gonna pay themselves, people.

I cannot believe Debbie Gibson had five Top 40 hits from her debut. I can’t believe this one will reach #22. How did anyone delude themselves into thinking this was good or even entertaining. Debbie sings at one level at all times: obnoxious brat. This was someone who obviously was never told no, and so she was empowered to unleash this pain on our ears. I swear this is why Casey quit his show.

After this snoozefest, we finally impounded the speedwagon. Pitbull tried to steal it from the impound yard, but it’s hard to drive around with a boot on it.

This was Elton’s highest charting single of the 80s, making it all the way to #2. It’s hard to believe because it’s rarely played by 80s or classic rock stations. His buddy George Michael kept him out of the top spot with Monkey.

23. Chicago – I Don’t Wanna Live Without Your Love

Written by Albert Hammond and Diane Warren, it’s another sappy ballad saved only by the vocals of Bill Champlin. Songs like this hardly sound like the Chicago who gave us 25 or 6 To 4 and Beginnings. But since they were following advice from their financial advisor, David Foster, they recorded it and thus a #3 hit ensued, as well as a  padded 401K and a longer path to the Rock & Roll HOF.

Finally some great dance music. And it’s from Minneapolis, but doesn’t sound like Prince. It’s most notable for its Star Trek samples, especially Dr. Spock saying pure energy. Produced by Fred Maher, drummer of Scritti Politti, it will reach #3 in the Fall.

Fun Fact: They were part of the ill-fated Club MTV tour in 1989.

It’s sad to think that the band passed this off as their own song, rather than one written by CC Deville’s old band, Kid Rockers because they couldn’t write anything this good.

This is neither boomer rock or babysitter pop. I don’t know who it’s for, definitely not me. This is why Nirvana had to happen.

2 Replies to “When Words Get Broken”