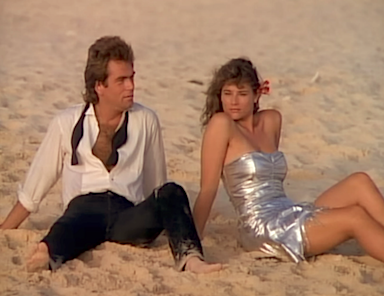 I loved listening to American Top 40 shows with Casey Kasem as I grew up in the 80s and then again in the 2000s until the beginning of this decade when Sirus XM replayed them. Then SXM got cheap, stopped airing them and decided to just do the same Billboard Top 40 countdowns except with the MTV VJs running the show. That’s all fine and good. However as our access to history has increased, the cupy should have better. Instead these shows would get lazy and cut and paste some of the info from Wikipedia entries, so much so, that I had a special alert called RFW [Ripped From Wikipedia] when that would happen. It’s gotten so bad that I don’t use that designation anymore. Just assume now that it occurs every song, every single time, just like on this show from October 18th, 1986.

In 1986 MTV held a make your own video contest for this song. This is one of my least favorite Madonna songs, but I still listened to it over and over again to get some good ideas. And with my parents video camera I planned to create something to submit. But eventually I gave up. I had no idea they were going to devote a whole day on the channel to showing all of the submitted videos.

Eddie Money and Ric Ocasek passed away last month within two days of each other. Coincidentally they shared a few months together in the Top 40 during 1986, including this week with Ric at #33 and Eddie moving into the Top 20. This will be Money’s first Top 10 hit when it reaches #4 in Mid-November.

I’ll assume this song was about a religious follower and not someone who was boring in the bedroom. I think the lyrics can support both arguments. The Eurythmics would have only one more Top 40 after this – Don’t Ask Me Why, which peaked at #40 in 1986.

THW – Dave Stewart shows up again, this time playing the guitar solo on Daryl Hall’s first solo hit which is definitely artier than anything Hall & Oates had done during the 80s. Daryl is waking up to the fact that this song has run its course since it peaked at #5 two weeks ago.

OHW, PD – That’s it? Those are my two choices. Reminds me of that line in the Blues Brothers when they ask the bartender what kind of music they have – We got both kinds. We have Country. And Western.

After an eight year wait, Boston is back with their third album, Third Stage as if they never left, acting like the musical trends of ’78 never shifted. This song debuted at #51 at the end of September and will spend two weeks at the top as soon as the calendar turns to November.  Note to Tom Scholz – I know you spend a lot time making these records. But dude the drums on this song suck.

Fun fact: I have a neighbor named Mandy who was born Amanda, so she’s represented by two different #1 pop songs.

Raise your hand if you thought this band would ever get another #1 hit. This is the first of three Jimmy Jam/ Terry Lewis compositions in the Top 20 this week, part of a monster year for them. Funny that they were fired by Prince from the Time only three years ago.

I don’t care who you are or what you look like, no one wants to hear the word stuck when their partner is discussing their relationship. And failing to take the bait and not wanting to change phone numbers and addresses is no reason to stay together. I pity the wedding parties that had to dance to this.

Fun fact: The woman in the video, Keely Smith married Pirece Brosnan and they have been happily stuck together since.

12. Loverboy – Heaven In Your Eyes

More Top Gun mush, this time from Loverboy whose ballads were all beginning to run together, like three-day-old warmed up bowl of oatmeal.

RAR – Seeminlgy out of nowhere, Miss Baker showed up to save our souls with this sultry jazz pop offering. But she had been working hard since her stint with Chapter 8 in the late 70s and it finally began to pay some dividends. From the album Rapture, this will be Top 10 on the Soul, AC & Pop charts, on its way to #8. Her follow-up in two years will be even better.

9. Lisa Lisa & Cult Jam With Full Force – All Cried Out

PFK – I had a girlfriend at the time that told me that if we broke up she would play this song nonstop until I came back. I decided to test out her theory. I never saw her again.

8. Robert Palmer – I Didn’t Mean To Turn You On

Robert loved to cover osbcure contemporary R&B songs, so his version of Cherrelle’s Top 10 R&B dance track was par for Palmer’s course. Although every time I hear his lower register vocals they sound as if after his says the titular line, he wants to follow it up with a “but since you’re turned on, may i offer you some?” suggestion. Amanda will not be swayed and keep him at #2.

Filling the role of Canadian Teen Beat idols, here’s Glass Tiger (you know, like jumbo shrimp) with a mid tempo shuffle that’s sounds like a Bay City Rollers outtake. This band is still around and released an album of new material earlier this year and embarked on a very polite cross country tour with fellow Canuck Corey Hart.

THW – Can a song that hit #3 be considered lost or forgotten? If so, put this one on that list. Or the Madonna clone list. This was also a big hit in South Africa. During Apartheid. There’s no joke there. I just thought that was interesting.

OHW – This pile of gutter trash opened the door for Bruce Willis’ hunk of monkey phlegm the following year. But I would have welcomed a collection of ragtime classics from Ted Danson.

4. Genesis – Throwing It All Away

The second single from Invisible Touch is stuck at its peak this week. We’ll just assume the subject matter was inspired from the collapse of his first marriage like all of his other hits.

PFK – This will be Cyndi’s second and final #1 next week and will endure as a standard in the LBGT community. Can’t believe this was originally written for Anne Murray. And funny how my kids only know the version from the Trolls movie.

You are now witness to a Phil Collins trifecta. While he sings #4 and would cover #3 in 1998 to the delight of dentists everywhere, here he is again, playing drums on Tina’s #2 smash. If this song was written with Miss Turner in mind, I’d like to see the original deposition, please. Or the video, if there is one. [Wait, there is.]

Here’s Miss Jackson (I’m kind of nasty) with her first of ten Pop #1s. It’s a nice change of pace from her first two Control singles. While the first two showed off her no-nonsense confident woman persona, this one shows her sweet effeverscent side. You can just imagine her beautuful smile shining through, rosing up those cheeks as she laughs and exclaims feels so good.

One Reply to “Bound By All The Rest”